If you make heavy use of your iPhone 12 and often find the battery running low while you’re out and about, the Apple MagSafe Battery Pack ($99) will likely become your favorite new accessory. Small enough to slide into a pocket or bag, the MagSafe Battery Pack adds hours of use to your phone, snapping neatly into place with the aid of precisely positioned magnets. Apple’s external battery solution may seem pricey when compared with other portable chargers and power banks, but its excellent build quality and one-year warranty make it one of the best ways to charge your iPhone on the go, and our Editors’ Choice winner for iPhone 12–compatible external batteries.

The MagSafe Battery Pack is a small, slightly chunky device that measures 3.75 by 2.5 by 0.43 inches (HWD). It works with every MagSafe-compatible iPhone and fits perfectly on the back of the iPhone 12 mini.

The aesthetic here can be best described as utilitarian. The outer shell is made of a durable white plastic with a gray Apple logo centered in the upper half. The charging face of the battery pack is covered in gray silicone that matches the logo on the other side. A Lightning port and an indicator light are on the bottom edge.

Although the outer shell has a matte finish, it’s very slippery and easy to drop, though after several accidental drops, we didn’t notice any scratches. The only damage that occurred was some staining on the silicone charging plate from being attached to a phone in a leather case.

Apple doesn’t offer AppleCare for the MagSafe Battery Pack, but it does include a one-year warranty. If the device stops working and there’s no obvious damage, you can take it to any Apple Store for repair or replacement.

We wish Apple offered designs that complemented the iPhone 12, as a thick white puck stuck to the pack of the back of a blue or green iPhone 12 looks clunky. It would also be useful to have a USB-C port in addition to the Lightning port.

Much More Than a Number

At 3,687mAh, the iPhone 12 Pro Max’s battery may seem paltry compared with the 5,000mAh cell in the Samsung Galaxy S21 Ultra, but don’t be fooled by a simple number. Thanks to Apple’s more efficient hardware and software, our tests showed the iPhone 12 Pro Max’s battery lasting for more than 15 hours, compared with a bit over 11 hours for the Galaxy S21 Ultra.

And even those tests don’t tell the whole story. The truth is that most battery drain tests, including our own, aren’t an accurate representation of day-to-day usage for any phone. We start with a full charge and force the phone to do battery-intensive tasks nonstop until it’s drained. Most people use their phones on and off throughout the day. For instance, you may read the news on your morning commute, check your messages a few times during the day at work, and then turn on Spotify and scroll through Twitter on the way home. That will have a different effect on battery than our torture tests. 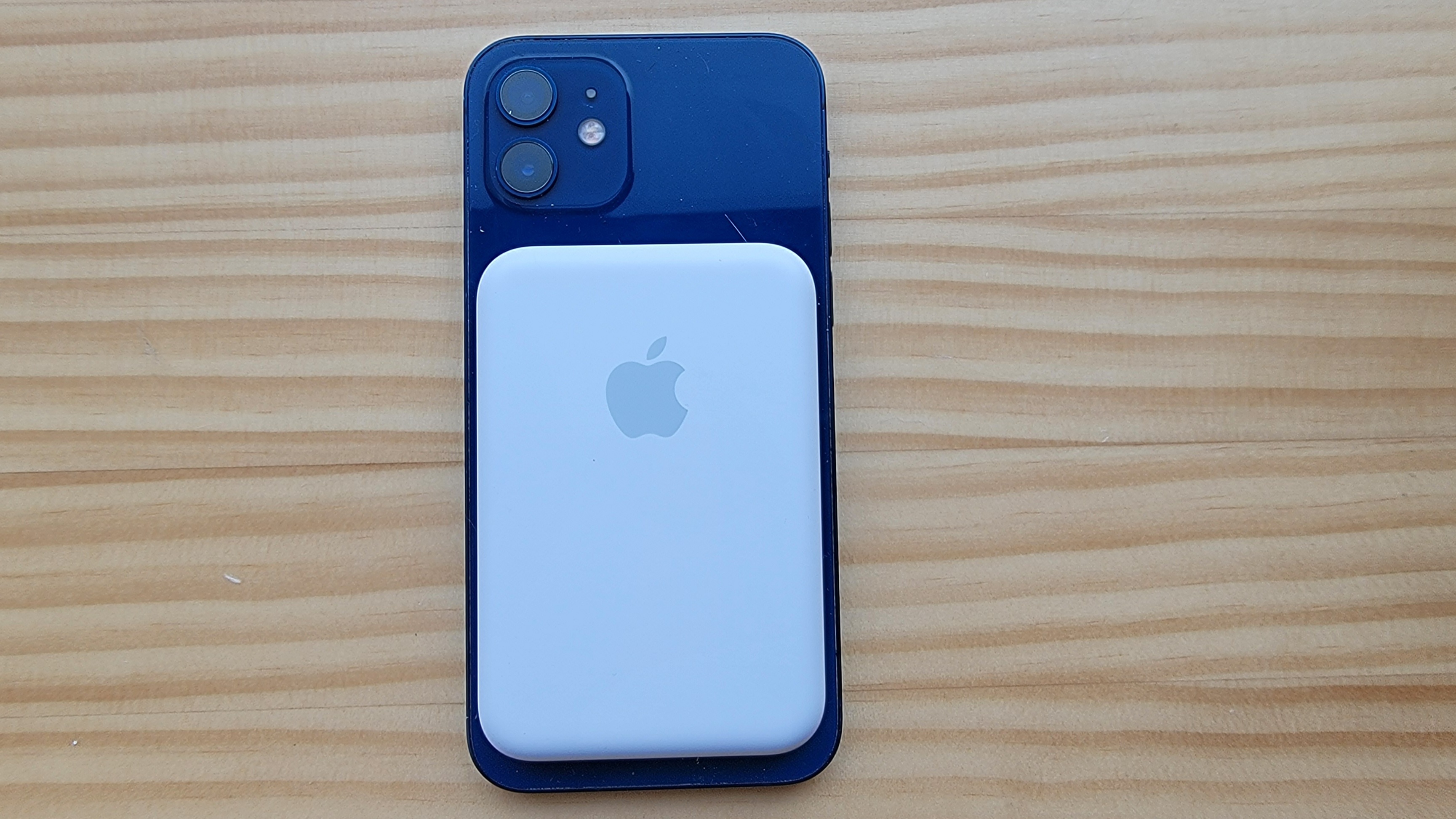 The white MagSafe Battery Pack doesn’t match the aesthetic of the iPhone 12.

The MagSafe Battery Pack’s 1,460mAh capacity might seem low at first glance; it’s little more than half the capacity of the iPhone 12 mini’s 2,227mAh battery, and far less than the 5,000mAh external batteries you can find for a quarter of the price. But the numbers are once again deceiving.

Milliamp-hours (mAh) theoretically define a battery’s capacity to power a device—or recharge a device, in the case of battery packs—but that statistic is calculated with the assumption that the two devices have the same voltage. If their voltages are different, the effective mAh rating changes. Since all the iPhone 12 models have 3.81V batteries and the MagSafe Battery Pack has a 7.6V potential, the Battery Pack’s effective mAh capacity is actually 2,920mAh. (A lot of math is involved in figuring this out; Apple Insider’s Wesley Hillard does an excellent job of breaking it down.) 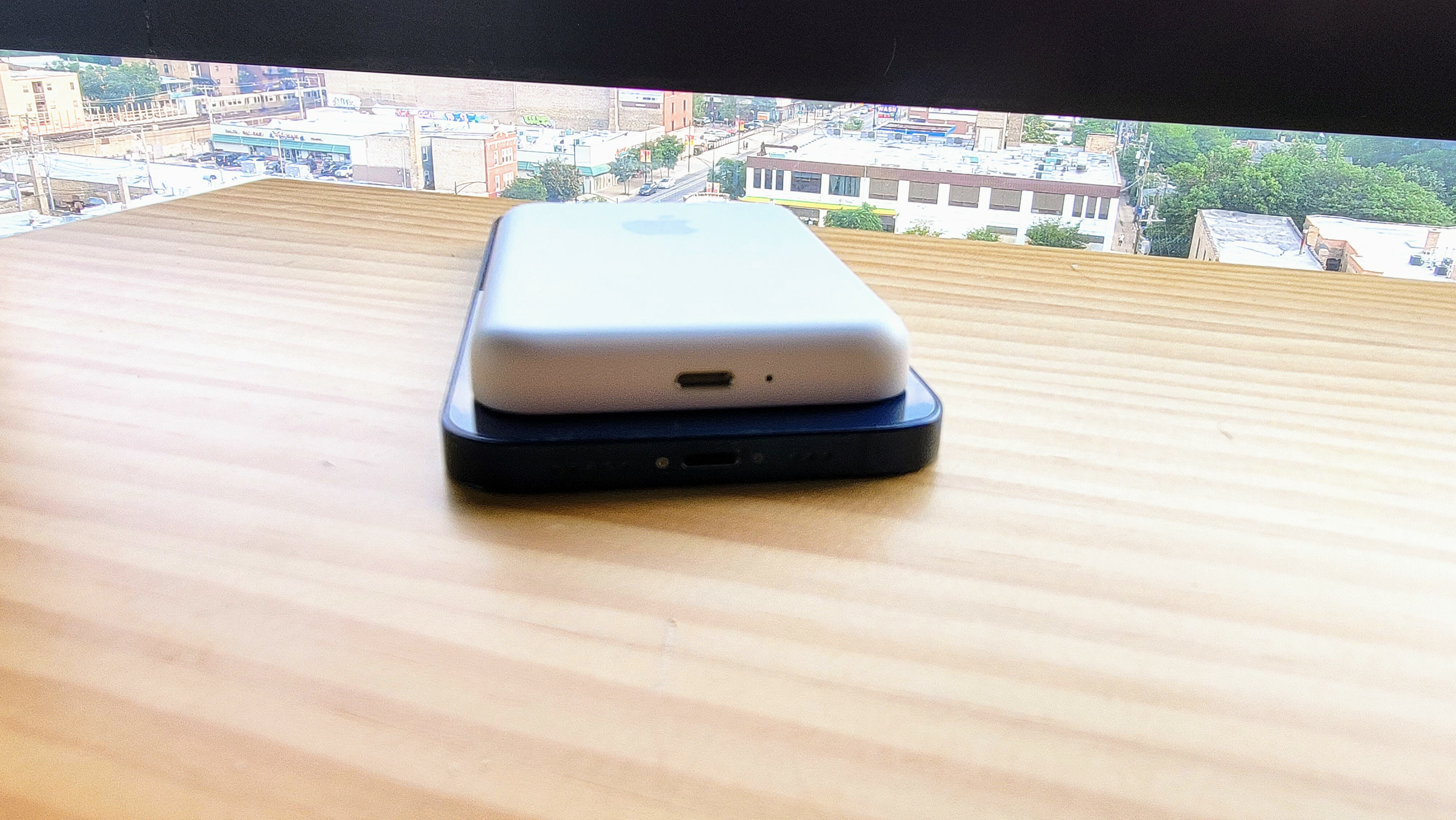 To make things even more confusing, the effective mAh capacity doesn’t account for inefficiency. If you use a regular Qi wireless charger to charge a phone, about half the power is lost due to device placement, heat, and other environmental factors. MagSafe is more efficient than Qi because the magnets ensure perfect positioning of the phone on the charger, but there is still a significant amount of lost power. And both the iPhone 12 and the MagSafe Battery Pack have built-in safety features that help prevent the products from overheating and minimize battery degradation, but limit charging capability and speed in the process.

Long story short: The MagSafe Battery Pack is more capacious than it looks, but it can’t fully recharge any of the iPhone 12 models from 0% to 100%.

Apple’s MagSafe Charger can deliver 15W charging, and so can the MagSafe Battery Pack—as long as it’s plugged into a 20W+ power adapter. Unplugged, it maxes out at 5W.

These are all theoretical speeds. When we connected an unplugged MagSafe Battery pack to an iPhone 12, it delivered 4W of power on average. Plugged into a 100W charger, the MagSafe Battery Pack’s actual charging wattage varied from 3W to 11W. 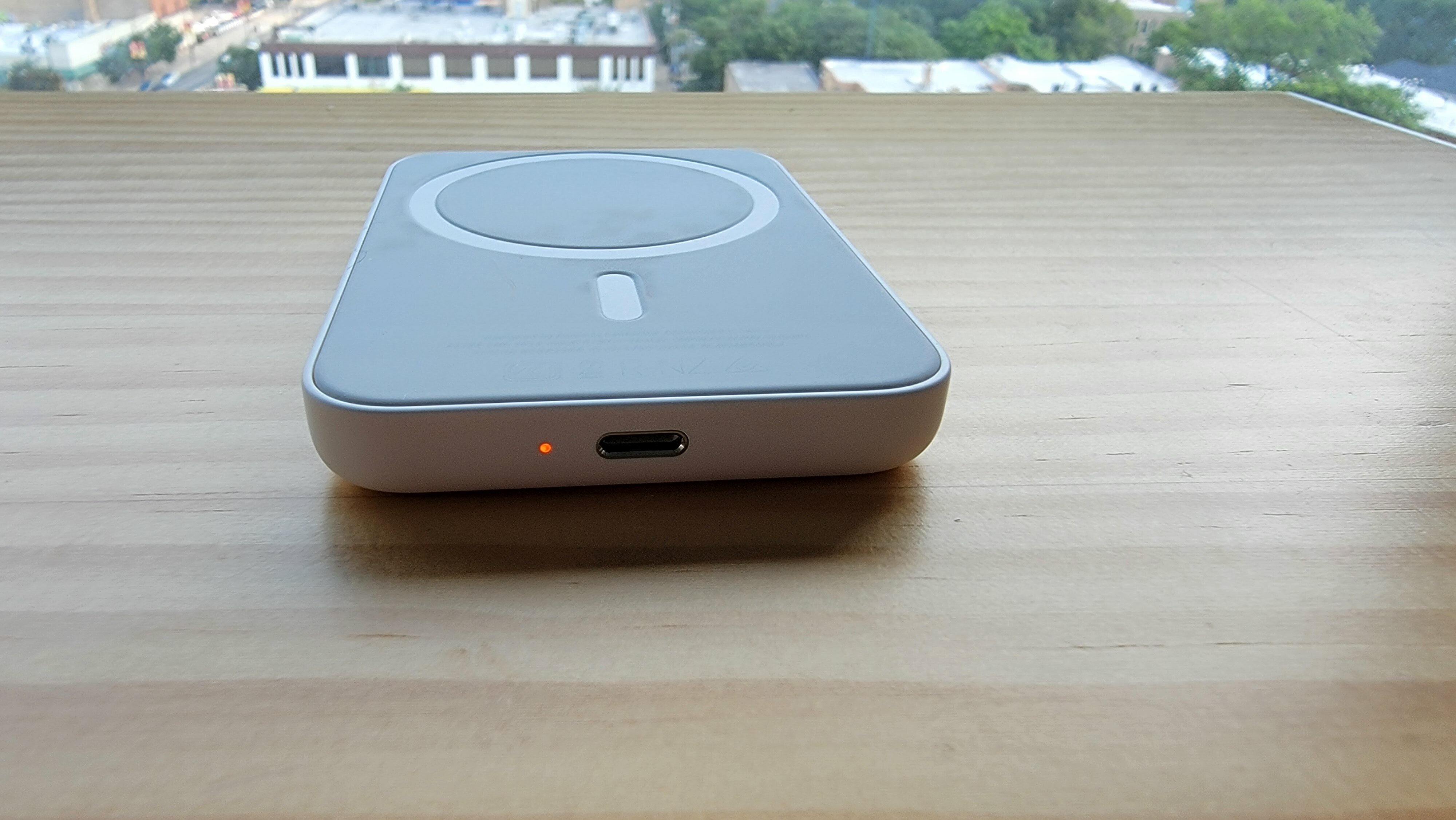 An indicator light on the bottom of the MagSafe Battery Pack turns green when it’s fully charged.

When the MagSafe Battery Pack was plugged in, it managed to add 72% to our iPhone 12’s battery in about 2.5 hours. Unplugged, it gave a boost of 67% over a period of 4 hours. When we attached the Battery Pack to a fully charged iPhone in the morning, it kept the phone at 100% for about 7 hours.

For the fastest charging speeds, you’ll need a 20W+ USB-C power adapter and a USB-C–to-Lightning cable; neither is included with the MagSafe Battery Pack. However, if you already have a good fast charger for your iPhone 12, that should be just fine.

Bidirectional charging makes it much simpler to keep both your phone and battery topped up. Plug in the battery on your bedside table or desk and keep your phone parked there whenever you’re not using it, the way you would with any MagSafe charging station. When it’s time to go, both the iPhone and battery will be fully charged. And if you later need to charge your phone faster than the battery can, plug it in directly and it will juice up the battery in the process.

The Apple MagSafe Battery Pack can get even the most demanding iPhone 12 users through a full day between charges. It’s durable enough to handle your daily commute with ease, and easy to charge when you get home. Even without a power adapter and charging cable in the box, we still think the MagSafe Battery Pack is a good value, especially once you add its warranty and safe charging features into the equation.

If you’re looking for a more affordable option, check out our recommendations for the best portable chargers and power banks. But we know Apple customers value thoughtful design, clever features, and simplicity of use, and that’s why the MagSafe Battery Pack earns our Editors’ Choice award.